The Global Maritime Distress and Safety System (GMDSS) is an internationally agreed-upon set of safety procedures, types of equipment, and communication protocols used to increase safety and make it easier to rescue distressed ships, boats and aircraft.

GMDSS consists of several systems, some of which are new, but many of which have been in operation for many years. The system is intended to perform the following functions: alerting (including position determination of the unit in distress), search and rescue coordination, locating (homing), maritime safety information broadcasts, general communications, and bridge-to-bridge communications. Specific radio carriage requirements depend upon the ship's area of operation, rather than its tonnage. The system also provides redundant means of distress alerting, and emergency sources of power.

Recreational vessels do not need to comply with GMDSS radio carriage requirements, but will increasingly use the Digital Selective Calling (DSC) VHF radios. Offshore vessels may elect to equip themselves further. Vessels under 300 Gross tonnage (GT) are not subject to GMDSS requirements. 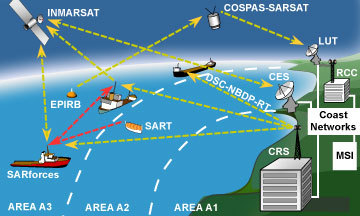 Since the invention of radio at the end of the 19th century, ships at sea have relied on Morse code, invented by Samuel Morse and first used in 1844, for distress and safety telecommunications. The need for ship and coast radio stations to have and use radiotelegraph equipment, and to listen to a common radio frequency for Morse encoded distress calls, was recognized after the sinking of the liner RMS Titanic in the North Atlantic in 1912. The U.S. Congress enacted legislation soon after, requiring U.S. ships to use Morse code radiotelegraph equipment for distress calls. The International Telecommunications Union (ITU), now a United Nations agency, followed suit for ships of all nations. Morse encoded distress calling has saved thousands of lives since its inception almost a century ago, but its use requires skilled radio operators spending many hours listening to the radio distress frequency. Its range on the medium frequency (MF) distress band (500 kHz) is limited, and the amount of traffic Morse signals can carry is also limited.

Not all ship-to-shore radio communications were short range. Some radio stations provided long-range radiotelephony services, such as radio telegrams and radio telex calls, on the HF bands (3–30 MHz) enabling worldwide communications with ships. For example, Portishead Radio, which was the world's busiest radiotelephony station, provided HF long-range services.In 1974, it had 154 radio operators who handled over 20 million words per year. Such large radiotelephony stations employed large numbers of people and were expensive to operate. By the end of the 1980s, satellite services had started to take an increasingly large share of the market for ship-to-shore communications.

For these reasons, the International Maritime Organization (IMO), a United Nations agency specializing in safety of shipping and preventing ships from polluting the seas, began looking at ways of improving maritime distress and safety communications. In 1979, a group of experts drafted the International Convention on Maritime Search and Rescue, which called for development of a global search and rescue plan. This group also passed a resolution calling for development by IMO of a Global Maritime Distress and Safety System (GMDSS) to provide the communication support needed to implement the search and rescue plan. This new system, which the world's maritime nations are implementing, is based upon a combination of satellite and terrestrial radio services, and has changed international distress communications from being primarily ship-to-ship based to ship-to-shore (Rescue Coordination Center) based. It spelled the end of Morse code communications for all but a few users, such as amateur radio operators. The GMDSS provides for automatic distress alerting and locating in cases where a radio operator doesn't have time to send an SOS or MAYDAY call, and, for the first time, requires ships to receive broadcasts of maritime safety information which could prevent a distress from happening in the first place. In 1988, IMO amended the Safety of Life at Sea (SOLAS) Convention, requiring ships subject to it fit GMDSS equipment. Such ships were required to carry NAVTEX and satellite EPIRBs by August 1, 1993, and had to fit all other GMDSS equipment by February 1, 1999. US ships were allowed to fit GMDSS in lieu of Morse telegraphy equipment by the Telecommunications Act of 1996.

The main types of equipment used in GMDSS are: 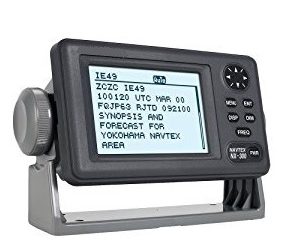 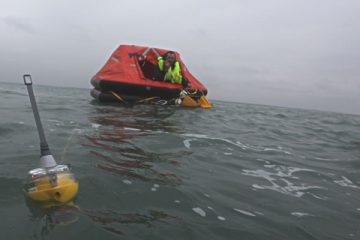 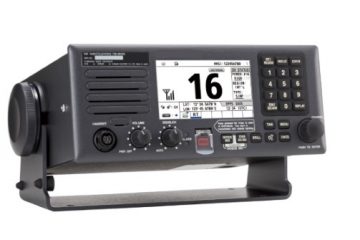 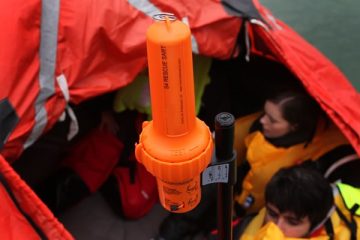 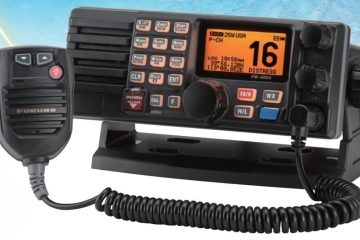 GMDSS equipment is required to be powered from three sources of supply:

The batteries are required to have a capacity to power the equipment for 1 hour on ships with an emergency generator or built prior to February 1995, and 6 hours on ships not fitted with an emergency generator or built after February 1995 in order to comply with SOLAS. The batteries must be charged by an automatic charger, which is also required to be powered from the main and emergency generators. Changeover from AC to battery supply must be automatic, and effected in such a way that any data held by the equipment is not corrupted ("no break").

During Coast Guard inspections, the batteries must be able to go from 100% discharge to fully charged in no longer than 10 hours in order to pass certification. The charger too must be obtainable at all times during vessel operation and should be inspected to make sure it functions properly. When the reserve source of energy consists of batteries, the battery capacity must be checked at intervals not exceeding 12 months. If not completed within past 12 months, this must be done during inspection.

Storage batteries provided as a reserve source of energy must be installed in accordance with applicable electrical codes and good engineering practice. They must be protected from adverse weather and physical damage. They must be readily accessible for maintenance and replacement.

In addition to equipment listed below, all GMDSS-regulated ships must carry a satellite EPIRB, a NAVTEX receiver (if they travel in any areas served by NAVTEX), an Inmarsat-C SafetyNET receiver (if they travel in any areas not served by NAVTEX), a DSC-equipped VHF radiotelephone, two (if between 300 and less than 500 GRT) or three VHF handhelds (if 500 GRT or more), and two 9 GHz search and rescue radar transponders (SART).

An area within the radiotelephone coverage of at least one VHF coast station in which continuous digital selective calling (Ch.70/156.525 MHz) alerting and radiotelephony services are available. Such an area could extend typically 30 to 40 nautical miles (56 to 74 km) from the Coast Station.

An area, excluding Sea Area A1, within the radiotelephone coverage of at least one MF coast station in which continuous DSC (2187.5 kHz) alerting and radiotelephony services are available. For planning purposes, this area typically extends to up to 180 nautical miles (330 km) offshore during daylight hours, but would exclude any A1 designated areas. In practice, satisfactory coverage may often be achieved out to around 150 nautical miles (280 km) offshore during night time.

An area, excluding sea areas A1 and A2, within the coverage of an Inmarsat geostationary satellite. This area lies between about latitude 76 Degrees North and South, but excludes A1 and/or A2 designated areas. Inmarsat guarantees their system will work between 70 South and 70 North though it will often work to 76 degrees South or North.

An area outside Sea Areas A1, A2 and A3 is called Sea Area A4. This is essentially the polar regions, north and south of about 76 degrees of latitude, excluding any A1, A2 and A3 areas.