An uninterruptible power supply (UPS) is a device that allows a computer to keep running for at least a short time when the primary power source is lost. It also provides protection from power surges.

A UPS contains a battery that “kicks in” when the device senses a loss of power from the primary source.If you are using the computer when the UPS notifies you of the power loss, you have time to save any data you are working on and exit gracefully before the secondary power source (the battery) runs out. When all power runs out, any data in your computer’s random access memory (RAM) is erased. When power surges occur, a UPS intercepts the surge so that it doesn’t damage the computer.

UPS in the data center

Every UPS converts incoming AC to DC through a rectifier, and converts it back with an inverter. Batteries or flywheels store energy to use in a utility failure. A bypass circuit routes power around the rectifier and inverter, running the IT load on incoming utility or generator power.

Voltage and frequency independent (VFI) UPS systems are called dual or double conversion because incoming AC is rectified to DC to keep batteries charged and drive the inverter. The inverter re-creates steady AC power to run the IT equipment. 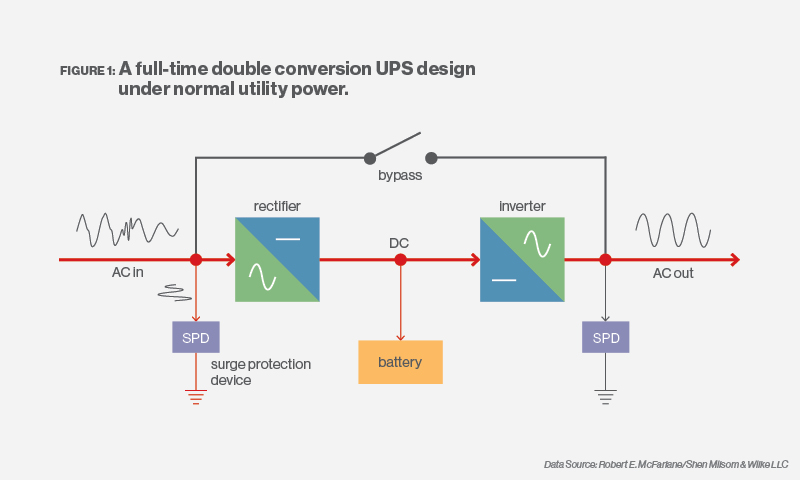 When power fails the batteries drive the inverter, which continues to run the information technology (IT) load. When power is restored, either from the utility or a generator, the rectifier delivers direct current (DC) to the inverter and simultaneously recharges the batteries. The inverter runs full time. Utility input is completely isolated from the output, and bypass is only used for maintenance safety or if there’s an internal electronics failure. Since there is no break in the power delivered to the IT equipment, vacuum fault interrupter (VFI) is generally considered the most robust form of UPS. Most systems synchronize the output frequency with the input, but that’s not necessary, so it still qualifies as frequency independent. 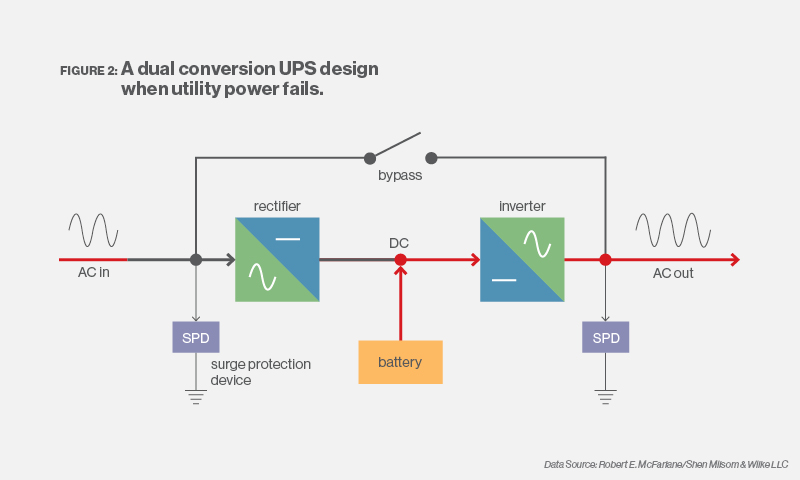 Every power conversion incurs a loss, so the wasted energy has historically been considered the price of ultimate reliability. The newest VFI systems claim better than 96% efficiency at nearly all loads.

Voltage independent (VI), or true line interactive UPSes have a controlled output voltage, but the same output frequency as the input. Frequency independence is rarely a concern with power in developed countries. Utility power feeds directly to the output and IT equipment, and the rectifier keeps the batteries charged. The inverter is paralleled with the output, compensating for voltage dips and acting as an active filter for voltage spikes and harmonics. Rectifier and inverter losses only occur when incoming power fluctuates. Flywheels and motor/generator sets also qualify as VI. 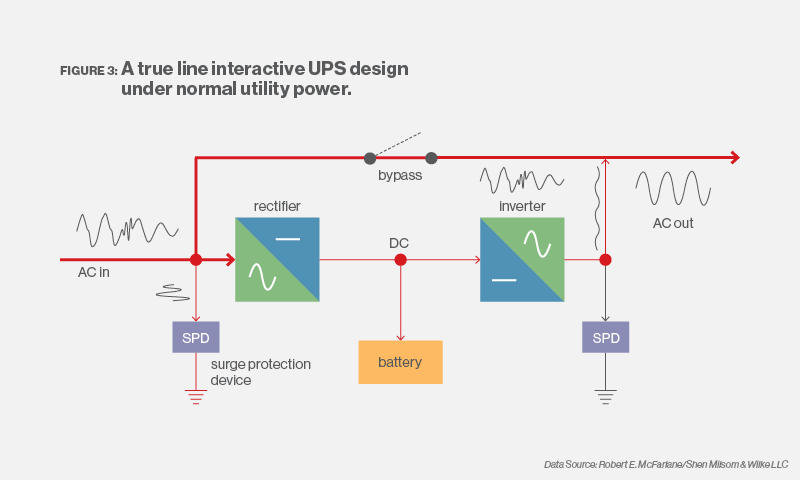 When incoming power fails, or the voltage goes out of range, the bypass quickly disconnects from the input and the battery drives the inverter. When input power is restored, the bypass re-engages the input, re-charges the batteries, and keeps output voltage constant. UPS vendors who use paralleled power sources claim no loss of reliability. The result is around 98% energy efficiency. 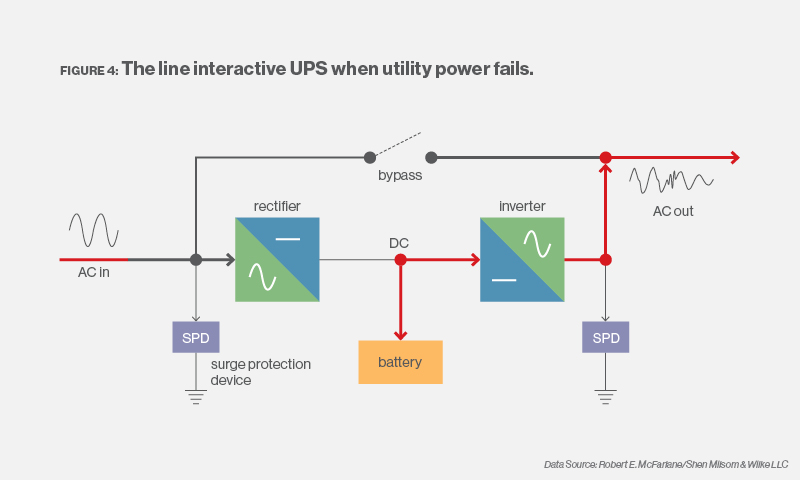 Voltage and frequency dependent (VFD), or standby UPS, is operationally similar to VI and is sometimes mistakenly called line interactive. In conventional VFD systems the inverter is turned off, so it can take as long as 10 to 12 milliseconds (ms) to start creating power. That break can crash servers, making legacy VFD UPSes a bad fit for data centers. 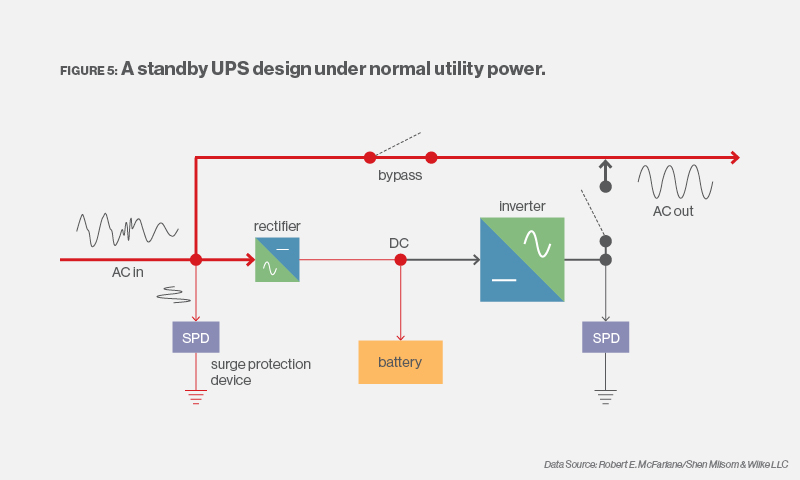 New VFD concepts have the inverter producing power within 2 ms after being activated. The bypass is normally engaged, just as with VI, so equipment operates directly from the utility or generator. Since the inverter isn’t working until power fails, there is no voltage control or power consumed, enabling efficiencies as high as 99%. Power failure or voltage outside of range opens the bypass switch, disengaging input from output; the inverter starts operating from the batteries. The rectifier is only large enough to keep the batteries charged. 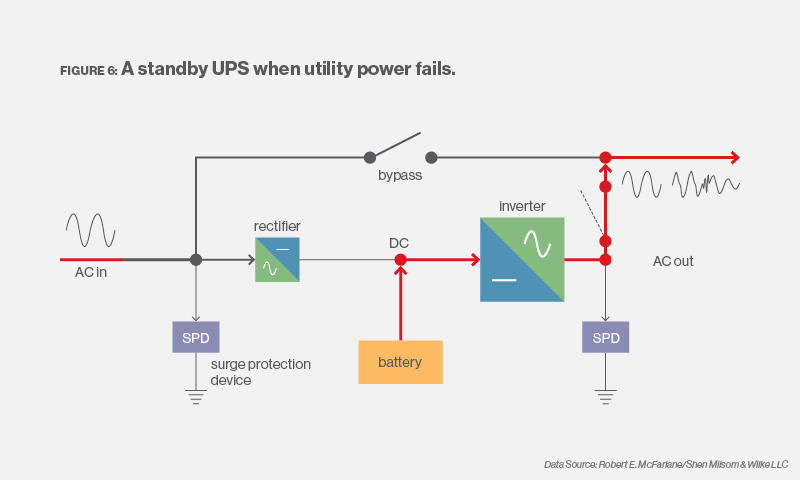